This guide will assist you in how to deploy code to your application using Git commands with just a few steps.

Written by Cloudways Product
Updated over a week ago

This guide will assist you in how to deploy code to your application using Git commands.

Remember that you can deploy your Git code (pull) using the Cloudways console (refer to this guide). However, if you want to use other Git functionalities (such as push, pull, clone, etc), you will need to access your server through SSH.

You need Master Credentials to run Git commands because Application Credentials do not have permission to generate and access SSH keys (stored in the default location). If you are a team member, you can use Git deployment via Cloudways Platform (or request master credential access from the account owner).

Connect to your server via SSH. (To do this please, follow this guide.)

Once the SSH connection has been established, you need to generate SSH keys for directly connecting your GitHub or Bitbucket repositories without providing a username or password every time.

Navigate to your desired web application’s webroot (public_html) and then type the following command to generate public and private RSA key pair.

Hit Enter to save the key in the default location (/home/master/.ssh/id_rsa). Hit Enter twice for no/empty passphrase.

Your SSH keys will be saved at the default location. Run the following command to view the generated public SSH key.

Copy the public key text carefully starting from ssh-rsa and ending in your email address. This text will be used in the next step. 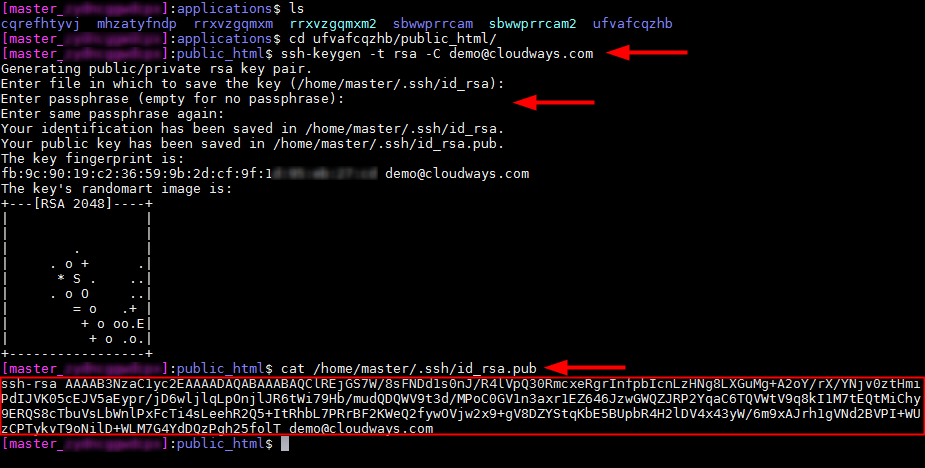 Step 3: Upload the SSH Public Key to Your Git Repository

We are using a Github account for this demonstration. If you prefer another Git service, you will have to find the equivalent way of completing this step.

Log into your GitHub account and choose your desired repository (which you want to connect to your web application). Then, navigate to Settings and click on Deploy Keys. 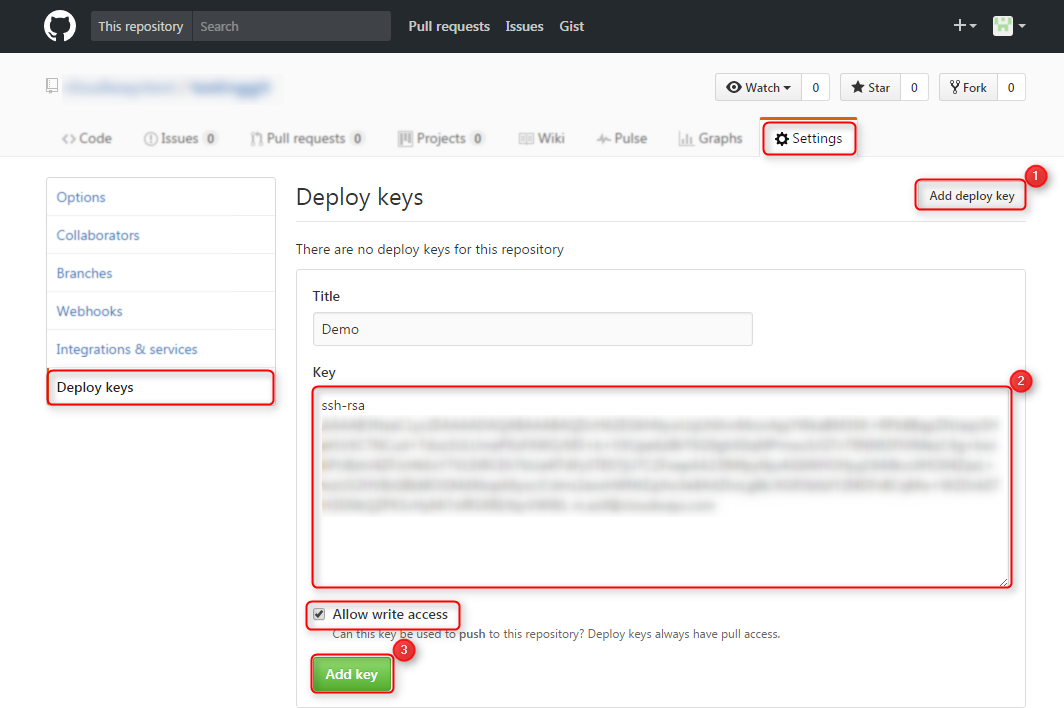 After successful addition of the SSH key to the GitHub repository, you can now execute Git commands on your server (under the application’s public_html or private_html) using the shell access with Master Credentials.

Some useful Git commands are mentioned below:

Git Clone: To get a copy of the code (web files) from the GitHub repository, use the following command.

Git init: Use the following command to initialize a local Git repository.

Git add: Add the files to your new local repository.

Git commit: Commit the files that you want to stage in the local Git repository.

Git remote add: Run the following command to add the Git URL where your local repository will be pushed.

Git push: Push changes in your local repository to your GitHub.

Git checkout: You can create a branch and switch to it by running the following command.

Or, if the branch has already been created, then:

Git merge: You can merge the branch into the master branch through the following command:

That’s it! We hope this article was helpful. If you need any help, then feel free to search your query on Cloudways Support Center or contact us via chat (Need a Hand > Send us a Message). Alternatively, you can also create a support ticket.

Did this answer your question?